Alliance for a Living Ocean

If you think medical waste and sewage spills are contamination issues limited to waters off the coasts of high pollutant countries like China and Indonesia, then think again.

It was a fateful day in late July of 1987 when a 50-mile debris slick full of household garbage, discarded biomedical waste, hospital trash and timbers floated 100 yards off the shoreline from Manasquan to northern Long Beach Island. By the time August rolled in, New Jersey’s Environmental commissioner had officially issued an advisory closing all nearby beaches out of concern that swimmers could be struck by timbers or jabbed by the hypodermic syringes ensnared in the sludge. In the meantime, pill bottles and rubbish had been creeping Southward, washing up on the beaches of Harvey Cedars and moving down, and the tourist season was officially over for LBI before the second month of summer had even begun. Little did anyone know the effects of this catastrophe would linger, continuing into the following year. The environmental disaster was dubbed the “Syringe Tide” and it was later discovered that a barge dumping off of Staten Island’s Fish Kill landfill was to blame. By Labor Day Weekend, LBI locals Ken Smith, Karen Kiss (who would be the organization’s first president) and John Woodland got together and organized a peaceful demonstration in response to this tragedy of LBI’s ocean waters. “Hands Across the Beach” was the first initiative by this alliance that rallied more than 40,000 people of all ages to join hands on a rainy Saturday afternoon along the entire length of Long Beach Island’s 18 miles of coastline to make a public statement and shed light on the issue of the degradation of its ocean waters. That is when the Alliance for a Living Ocean was born.

“The mission of the Alliance for a Living Ocean shall be to promote and maintain clean water and a healthy coastal environment through education, research and active participation. We recognize the need to manage our entire watershed, bay and ocean holistically since all water flows from “the raindrop to the ocean.”

Commonly referred to by its acronym, ALO, the Alliance for a Living Ocean is a 501(c)(3) non-profit grassroots, environmental organization headquartered on Long Beach Island whose goal is to stop pollution and protect the coastal environment which includes the oceans, beaches, and bays, as well as all of its inhabitants. Since its inception three decades ago, the Alliance has been instrumental in changing local ocean dumping regulations as well as the laws that govern the tracking and containment of medical waste. ALO’s legislative action, public engagement and educational efforts have successfully influenced the passing of the “New Jersey Medical Waste Tracking Law” in 1989 and “Clean Water Enforcement Act” in 1990 and led to the eventual shutdown of the Ciba-Geigy pipeline (which was an industrial pipeline based in Toms River that was emptying treated wastewater directly into the ocean). They were a driving force in the eventual closing of New York’s Fresh Kills Landfill, which was ultimately held accountable for the Syringe Tide disaster of 1987-1988.

Over the years, ALO has been recognized and awarded for its dedication, environmental commitment to the community and conservationist achievements. These honors hail from various local municipalities to the County of Ocean, to the United States Environmental Protection Agency (EPA) and United States Department of the Interior for their work with The United States Fish and Wildlife Service locally.

Although they have made great strides in this sector of environmentalism, Alliance for a Living Ocean continues to monitor ocean pollution and is currently working to address the issue of nonpoint source pollution, i.e. polluted runoff from agricultural chemical draining into the ocean and bay, sewer overflow, and wind-borne debris blowing out to sea. In the 1990s ALO joined the LBI Garden Club in their efforts to educate the community on the effects of pesticides/herbicides used on coastal yards. Anyone who has been on LBI during a heavy downpour can attest that rainfall quite literally floods most of the island in an instant, and then flushes out, rinsing the entire surface area into the bay. The very basic storm water runoff is something they attempt to educate the public about, as every bottle of weed-killer like RoundUp (whose main herbicidal active ingredient is glyphosate—something the World Health Organization’s International Agency for Research on Cancer (IARC) officially classified as a probable human carcinogen, citing “convincing evidence that glyphosate can cause cancer in laboratory animals.”) eventually ends up in the sea. Common herbicides, pesticides, fertilizers and other chemicals that are used on lawns and landscape rocks without a thought unfortunately unavoidably ends up in the waters, are ingested by the living creatures of the sea, which then in turn are ultimately consumed by us all.

The Environmental Protection Agency concludes that common trash from consumer goods makes up the majority of what eventually becomes marine debris, polluting our beaches, bay and oceans. There is a growing concern about the hazards of plastic pollution in the marine environment and, according to the EPA, plastics pose both physical (i.e. entanglement, gastrointestinal blockage, reef destruction) and chemical threats (i.e. bioaccumulation of the chemical ingredients of plastic or toxic chemicals absorbed by plastics) to wildlife and the marine ecosystem. “Anyone can see firsthand the direct impacts of our plastic mis-usage and the end result by checking out any of the bayside marshes and wetland areas. Nesting birds like ospreys constantly have balloon strings, bags, and other plastics mixed into the natural material. If you fish via boat you have no doubt seen and retrieved a number of mylar balloons in your time on the water. The effects are obvious,” insists Kyle Gronostajski, Executive Director of ALO.

Eric Solheim, Head of the United Nations Environment Program is quoted as saying, “Plastic is a miracle material. Thanks to plastics, countless lives have been saved in the health sector, the growth of clean energy from wind turbines and solar panels has been greatly facilitated, and safe food storage has been revolutionized....Plastic isn’t the problem. It’s what we do with it. And that means the onus is on us to be far smarter in how we use this miracle material.” While the dust regarding the single-use plastics ban on Long Beach Island has yet to settle, Gronostajski does allude to the fact that, respectfully, LBI is actually quite behind the curve regarding this initiative. All of California approved a statewide ban on plastic bags in 2016 (major cities such as San Francisco banned them as far back as 2007), and the same goes for all of Hawaii. In April of this year, Governor Cuomo announced a bill to ban plastic bags in New York State, while elsewhere, Costa Rica has banned single use plastics within the entire country, and republics such as Rwanda is now one of the cleanest nations on earth by means of a total ban as well. With the amount of harmful plastic litter in oceans and seas growing ever greater, the European Commission is even proposing new EU-wide rules to target the 10 single-use plastic products most often found on Europe’s beaches and seas, in addition to lost and abandoned fishing gear. Even Starbucks has announced it will eliminate single-use plastic straws by 2020. But as a community we all know that change takes time, and it is important to work together to find the right solution with a minimal impact on the environment, the economy and society.

“From carrying your own water bottle, to volunteering for a local clean-up, everybody needs to do something to stop plastic pollution from getting into the world’s oceans,” adds Gronostajski. He can be spotted monthly, weekly (if not daily), either solo or with organized beach clean-up crews scattered across the island, physically picking up litter, piece by piece, in an attempt to not only keep the Island’s beaches pristine and the waters of Barnegat Bay healthy, but also to collect important data and raise awareness. Kyle notes that the most common forms of plastic pollution he consistently finds on our local beaches are bottles, caps, food wrappers, bags and cigarette butts. Join ALO every 2nd Saturday of the month for their Beach Clean Up initiative, as volunteers are in short supply.

Regardless of the legislative outcome of plastics on the island, ALO urges for residents and consumers at the very least to recycle more and consider source reduction strategies towards living plastic-free as much as possible. The best way to reduce plastic pollution is to reduce its usage and production. Alliance for a Living Ocean sells reusable stainless-steel bottles, tumblers, and even distributes stainless steel straws to shoppers at the Surf City Farmer’s Market free of charge if they are spotted using a reusable bag or water bottle. The organization began placing filtered water stations at various locations and events on LBI, powered by PUR2o Water Filtration and Purification, in an effort to foster the reuse and refilling of water bottles on LBI. 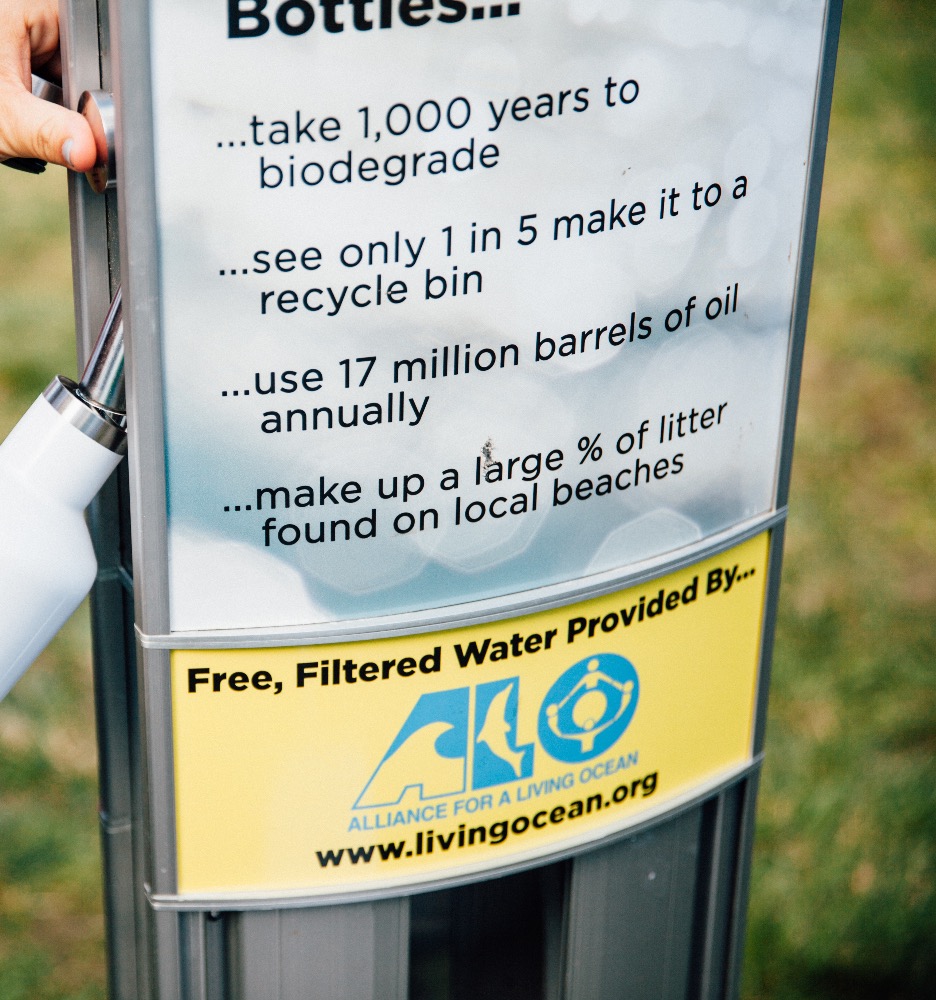 One of the core pillars of ALO’s mission towards reaching their goals of cleaner and healthier oceans is through education and outreach. The Executive Director and willing volunteers dedicate many hours of educational content in the form of classroom visits, field trips, applied activities and more. All events are geared specifically towards an age group the activities are organized for, and they all have the intent to engage with children from preschool-age right up through adulthood. The objective of all of their educational seminars is bringing awareness to the many issues they are involved in, in a fun and hands-on way, much like the weekly “Critter Roundup” which involves children seining the bay and observing, holding and learning about the creatures they find. The group also hosts a number of fundraisers throughout the year in the form of paddle races, surf contests such as the ALO Longboard Classic, and other celebratory events like Bay Day— to which they encourage everyone to browse through details about via their social media platforms Instagram @alo_lbi, Facebook.com/allianceforalivingocean and Twitter @ALOLBI. Their website www.livingocean.org also has an option to sign up for their newsletter to ensure you are always up-to-date with their latest ventures.

It’s daunting to conceive that such an accomplished organization runs on volunteers and donations alone, yet this is how ALO has been able to remain in existence for over 30 years. It is a small organization that relies primarily on volunteers to operate, and the Executive Director is tasked with running the day to day business aspect including event planning, fundraising, outreach and education, marketing, PR, and volunteer coordination at the very least. The board provides oversight and is comprised of all volunteer positions, all varying members of the community from business members to students to your average concerned citizens. Alliance for a Living Ocean always encourages and is thankful for any volunteers interested in activities and programing. To get involved, please email livingoceanalo@gmail.com. ALO hopes to engage the next generation of political leaders, conservationists, entrepreneurs, activists, scientists, and civil servants to identify solutions and commit to actions to protect the ocean so it can continue to sustain us all into the future.